Part 2 & other takeaways in this link

October 6, 2014 saw Flipkart make Rs 600 crore as a result of its “Big Billion Sale”. The brand also made news for a lot of wrong reasons – amplified disastrously on social media. Flipkart’s proposed 24 hour sale sold out in a mere 10 hours even as the website gave out and orders got cancelled. But the worst were the price fluctuations and jacked up pre-discount costs.

One tweeter summed up customer sentiment aptly, stating “among the billion things #Flipkart sold that day, one was its credibility.”

The Flipkart fiasco held an enthralling quality that invited debate in business classrooms, with a fun impromptu session at WMA as well. Digital marketing students and faculty congregated in the conference room to brainstorm on Flipkart’s mistakes and propose improvements. Amidst the vociferous ire of the many Flipkart (maybe ex) consumers in the room, interesting points were made, stuff that begged a blog post! 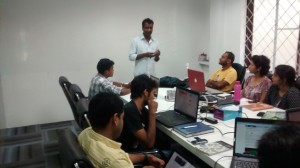 Record sales and an apology – too little too late?

Why does a business that’s just collected $600 crore sales in a single day have to send out a letter of apology the very next day? Because  the Flipkart sale was a mess from the start! Some highlights:

If you don’t know what this is about, check out the social media bashing Flipkart received through the day. Search on #flipkartsale and #flipkart on Twitter and Facebook.

But more to the point, did Flipkart’s apology salve its reputation or appease consumers? No. Did the 7 year old e-commerce company believe excuses and explanations would help? It just made them look worse and their competition a lot better.

What Flipkart could have done right

Without doubt, Flipkart underestimated the traffic the Big Billion Sale would drive by a HUGE margin. While the e-commerce company went overboard with digital and traditional marketing, it did a bad job predicting sales. While Indians are no stranger to infrastructure failures, the hardest thing to forgive will be the order cancellations and disillusionment from misleading discounts.

What were Flipkart’s mistakes? Some thoughts from WMAites:

Also in the bid to sell at lowest prices, Flipkart may have inadvertently created warranty hassles for customers by procuring from unauthorized channel partners. That’s going to bite Flipkart some more!

Listen to the Big Billion Day podcast from WMA on FIR.

Monica is a digital marketing enthusiast, blogger and technical writer. She has helped small businesses with content development for the last 5 years and is now extending the value with online marketing. Her goal is to introduce more businesses to this exciting and profitable marketing medium. She is a regular blogger for WMA.

Connect with her on Linkedin or Twitter for digital marketing assistance or to say hello!